Last September (2020) the Cyclist.ie Rural Cycling Collective officially launched our Vision for Cycling in Rural Ireland with the 8 priorities which we believe will enable more people in rural Ireland to cycle more often for everyday journeys.

Since we launched the Vision we are pleased to see changes have been made, linking to each of our 8 priorities. Some of these changes are big, others small but we believe all changes in the right direction are worth celebrating.

Below is a summary of the 8 priorities and what’s happened so far as of mid-2021.

1 – Create an environment in our cities, towns, villages and rural roads where Cyclists are Expected and Respected.

There is a growing recognition that,in addition to dedicated cycle lanes and tracks, there is huge potential to create environments in our urban and rural areas where people on bicycles feel expected and respected. Glimpses of this welcoming environment have been seen in a number of different towns and villages such as Ennis, where they redesigned the streets to create more space for active travel; Clonakilty where they removed motor traffic from some streets; Kilkenny where they introduced traffic calming measures; many towns where they introduced lower speed limits; and across the country where signs such as the 1.5m safe passing distance signs have been installed.

Within and between many towns and villages, cycle friendly infrastructure could include identifying safe routes along the existing smaller rural roads. With extra signage, traffic calming measures and lower speed limits, these “Rothar Roads” would allow people in rural areas to have the opportunity to cycle to schools, shops, work, and amenities knowing that they are ‘expected and respected’ by all road users. Community based projects have been started to identify and map these for example the ‘Share your Rothar Roads project in Leitrim.

The Rural Cycling Collective knows that quality network planning is key to quality cycle infrastructure, securing funding, garnering support, promoting cycling as a real alternative and so much more. In December applications opened for a €50M active travel fund for towns and villages, which was subsequently increased to €70million due to the volume of requests. In March the projects were announced. Several counties have received funding for transport studies including: Monaghan where they have drafted a Cycling & Walking Strategy; Kerry, where both Tralee and Kilarney will get interconnected cycleway networks; and Leitrim, where a County Cycle Network Plan Study is being planned. We hope this is the start of network plans being created in every local authority area.

In January the Department of Transport announced the creation of 248 new active travel posts 218 in local Authorities and 30 in TII Regional Design Offices – see the story on our website here. In announcing these posts, Minister for Transport, Eamon Ryan said that the new structure for the delivery of active travel is intended to “ ensure that the increased levels of expenditure planned deliver the right type of infrastructure, in the right place and at the right time.”

The new posts are yet to be filled but the Rural Cycling Collective are pleased to see the emphasis is on creating multi-disciplinary teams that acknowledge the complexity of reallocating road space and the need for not just engineering and architectural skills, but also communication and promotion. We hope that these new posts will help raise standards across the country.

Cyclist.ie also note that the National Transport Authority are expanding their team to ensure they have the capacity for oversight of all the new active travel schemes. Simultaneously a review of the National Cycling Design Manual is being undertaken – another welcome step.

A team within Cyclist.ie have also been busy the last few months creating an ambitious tool to be used as part of the design process to help ensure that none of the 5 needs of cycle route design (coherence, comfort, directness, attractiveness and safety) are overlooked. The latest prototype is currently being trialled and Cyclist.ie would welcome your feedback. To find out more about the Cycle Route Assessment Checklist (CRAC) and to get involved in trialling it follow this link – https://cyclist.ie/crac/. 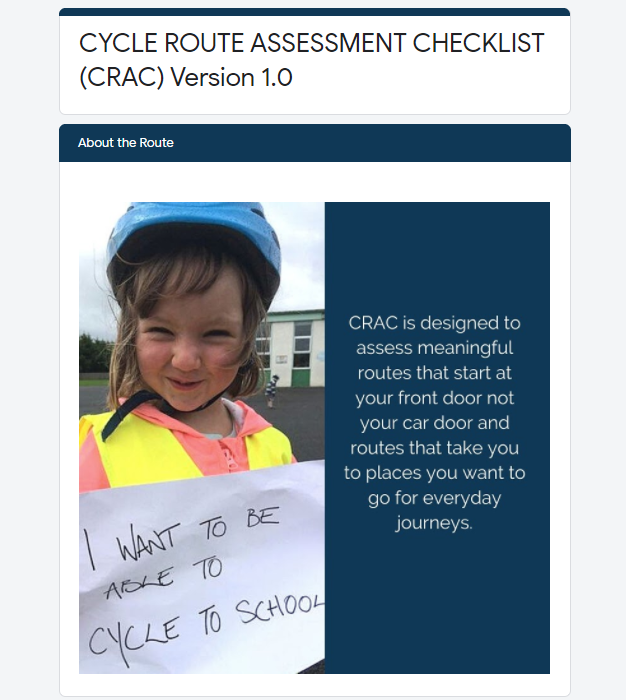 The school year began optimistically with Cycle Buses popping up and more and more children cycling to school everyday. Some of these were inspired by the Rural Cycling Collective’s Get to School on Your Own Fuel campaign which saw families practising their routes to school before the September rush.

Safe Routes to Schools became an issue on many people’s minds. In March, Minister of State, Hildegarde Naughton, announced the allocation of €15million for the Safe Routes to School programme – see here. Dun Laoghaire Rathdown County Council have initiated a safe routes to school project with widespread consultation. We look forward to seeing similar schemes in other Local Authorities. 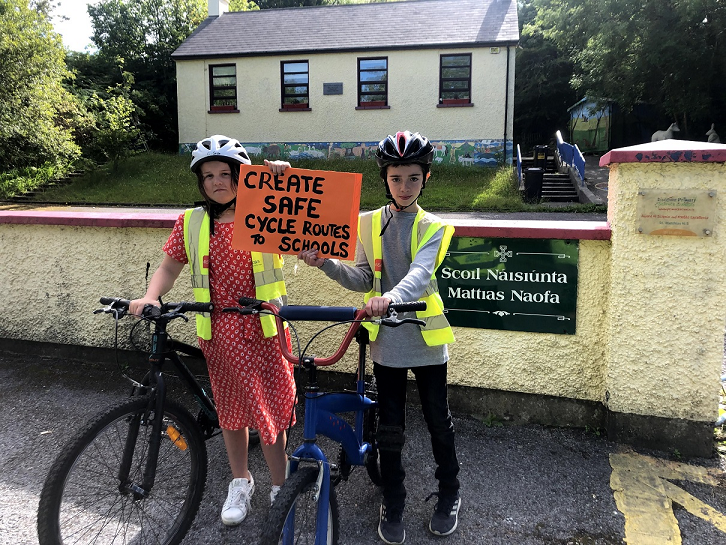 5 – Lower Speed Limits to make our roads and streets safer and more accessible for everyone, and to reduce casualties

Lower speed limits are a simple but vital way to make our roads and streets more accessible and safer for children, pedestrians and cyclists.  Love 30, the campaign for 30km speed limits, issued a press release in April, calling on the Minister for Transport to mandate a default 30km per hour speed limit in urban and built-up areas and outside schools – see https://www.love30.ie/call-default-30-kmh-all-urban-areas.

Kilkenny County Council are set to introduce a Gateways project at the entry points into the city – within this area a 30km/h speed limit is to be applied. Dublin City Council are also introducing reductions in speed limits which again we hope will be an inspiration to local authorities across the country – see here. A few months before the Vision for Cycling in Rural Ireland was launched it was announced that the new Programme for Government included a commitment to allocate €360M per year in capital funding to walking and cycling over the next 5 years. This was an exciting announcement and the strongest endorsement towards Active Travel ever seen in Ireland.To find out more about the detail of this commitment check out the full Programme for Government here.

This progressive announcement has been followed up with subsequent rounds of additional funding – further welcome steps forward in the country’s commitment to taking climate action.

If the promises in the Programme for Government are to lead to meaningful change, collaboration with all stakeholders is going to be important – the right people need to be asked the right questions at the right time.

In Skibbereen, collaboration is happening between cycling activists, councillors, local engineers and the local community.  A  recently formed Greenway group is looking into the permeability of Skibbereen, connecting the town within. Mapping is being developed to link schools and amenity areas with households and shops (for more info contact [email protected]). More information on this can be found by emailing [email protected].

Stakeholders have also come together from various organisations in Kilkenny, including Kilkenny County Council, Kilkenny LEADER Partnership, Kilkenny Recreation and Sports Partnership, Healthy Ireland and Waterford Institute of Technology (WIT) to work collaboratively on the CycleKilkenny project. The group has been working closely with Kilkenny Cycling and Walking Campaign group. See here.

Cyclist.ie’s ambitious Cycle Route Assessment Checklist (CRAC – http://cyclist.ie/crac/) has the aim of enabling a wider range of stakeholders to get involved in the design process. A perceived lack of ‘technical know-how’ and a lack of time can prevent ordinary people from participating in public consultations and assessments. It is envisaged that this user-friendly checklist will give people a quick, simple and meaningful way of allowing their voices to be heard.  The National Transport Authority and a number of Local Authorities are now trialling this tool.

The Stop Climate Chaos coalition of which Cyclist.ie is a member has been holding a series of workshops about aspects of the Climate Plan. On Tuesday, May 4th the Rural Collective had an opportunity to input to the workshop on Transport. On behalf of the Collective, Joan Swift explained how implementing the Rural Vision could contribute to reducing emissions from transport.  She stressed that in Rural Ireland, as elsewhere many trips currently done by car are short and lend themselves to active travel. Cyclist.ie submission on the Climate Action Plan can be read here: here.

Under a national program Cycle Right (https://www.cycleright.ie/), is being rolled out across the country, run by Cycling Ireland.

Cycle Training is an important piece of the jigsaw to build a culture of cycling. It improves bike skills and road awareness. For some children it is the first real opportunity to use a bike. Cycle training combined with quality cycle infrastructure, Safe Routes to schools. and a reduction of speed limits will provide opportunities for young people to gain the confidence they need to be able to cycle safely, not just to school but as they grow and gain more independence, to meet friends, to go to college, to work – it really is a skill for life.

Outside of schools we have also seen cycle training sessions for families (e.g. the Sligo Cycling Campaign Family Fun Cycle) as well as sessions for teenagers wanting to cycle on road and for parents wanting to steward cycle buses (e.g. the Leitrim Cycling Festival Cycle Confidence Programme).

And finally, to spread the love of bikes and work towards their manifesto goals the Rural Collective launched #RotharRides in February of this year. These take place on the first weekend of every month and are fun cycles that everyone can get involved in by simply enjoying a ride in their local area. Already we’ve seen rides happening from Donegal to Clonakility and many places in between.

Despite the pandemic we have a lot to be positive about.

The Rural Cycling Collective which only formed last summer has been busy building momentum, bringing media attention to the potential of everyday cycling in rural Ireland and creating something well worth shouting about!

We can’t wait to see where the roads will take us next!