This is the third in a series of articles on the recent Velo-city International Cycling Conference held in Ljubliana in Slovenia – with this one penned by the National Cycling Coordinator of Cyclist.ie and An Taisce, Dr. Damien Ó Tuama.

Listening to Prof. Jan Gehl in the opening plenary of Velo-city 2022 brought me right back to hearing him speak at one of the first conferences Dublin Cycling Campaign organised on the theme of “Making Dublin a bike-friendly city” (see here). That was in 2004 and his message has remained consistent: we need to move from streets filled with objects (cars) to ones filled with people (on bikes and on foot) – and we need activism to make it happen! His story of how Copehagen was invaded with cars from the 1950s, but then rehumanised from the mid-1970s onwards never fails to inspire.

It was particularly inspiring this year to see a strong Irish delegation from the advocacy sector, local authorities, state agencies and private companies. Some of these delegates would have participated in Velo-city in Dublin in 2019 (see Dublin Cycling Campaign’s report on that conference here), but there were plenty of new faces too which probably reflects the ambitious investment plans for cycling following the publication of 2020 Programme for Government, the advancement of plans such as the National Cycle Network (on the NCN, see here) and the growing membership of Cyclist.ie.

In this article, I pick out just some of my highlights from Velo-city Ljubliana – and there are many to choose from.

1 – Session on Cycling Advocacy in Central and Eastern Europe
While attending conferences it is always interesting to learn about the local cycling advocacy culture in the Velo-city host country, the political contexts advocates work within and the successes groups have contributed to. Slovenia itself shares borders with Italy, Austria, Hungary and Croatia (see below), and there was strong representation at the conference from each of these countries and from other Balkan states. 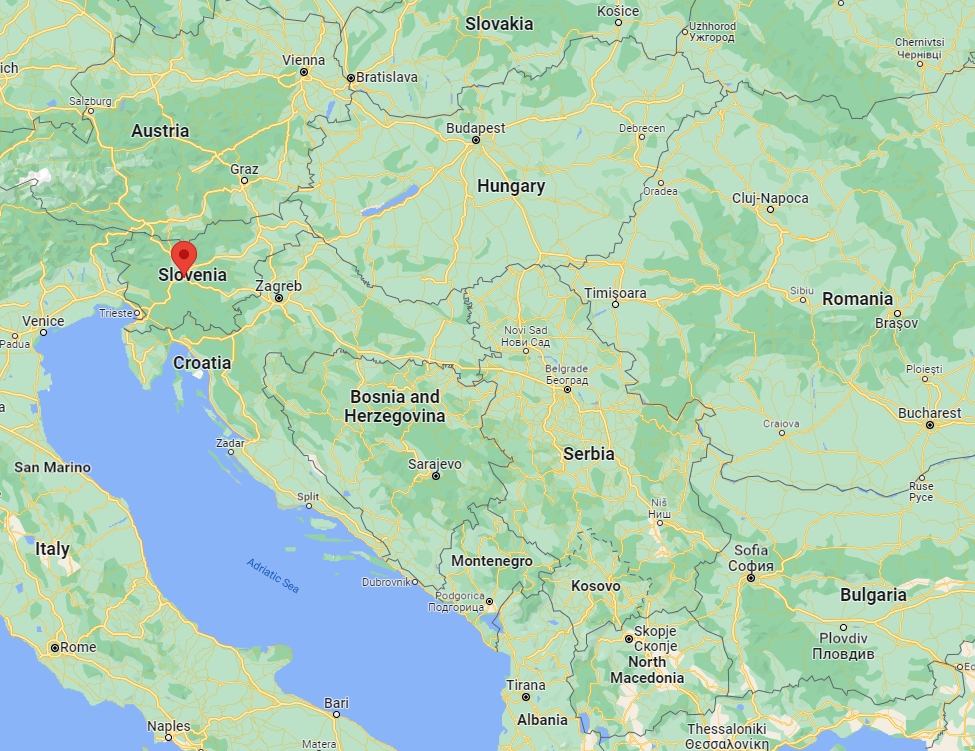 Ljubljana, the Slovenian capital city with a population of just under 300,000, is undoubtedly very impressive with its 17 hectares of refurbished open public space designated to pedestrians and cyclists (see here), and with Slovenska Cesta, one of Ljubljana’s busiest streets, turned into a road exclusively for public transport, pedestrians, and bicycles. There are also 830 public bicycles available from 83 stations around the city. The Slovenian Cyclists’ Network continues to campaign throughout the country for improved infrastructure, more bike parking at train stations and for an expansion of their Bike to Work scheme.

To the north east of Slovenia, we heard about some successes in Slovakia (the biggest car producer in the world on a per capita basis) and in Hungary where the national cycling association has approximately 2000 members across 18 local groups. Meanwhile in Croatia, the cycling advocates of Zagreb are role models for the rest of Croatia, where the main emphasis is on the need for safe cycling infrastructure. It was lovely to be able to share the 2-3 hour train ride from Zagreb to Ljubliana with lead members of Sindkat Biciklista from Croatia and to get a sense of how their organisation is faring. It is somewhat similar to Cyclist.ie is that it has one full-time employee supporting a large body of active volunteers, but is actively seeking to grow in size and make a bigger impact.

The most challenging context for cycle advocacy in the region appears to be Romania, and Radu Mititean, President of the Romanian Cyclists’ Federation, gave a strikingly candid presentation on the difficulties facing cyclists and cycling advocates in the country. He distilled the challenges faced down to three (large!) domains: attitudes, infrastructure and legislation (see below). Shockingly we learnt that there is a complete ban on cycling for those under 14 years on all public roads in Romania. However hard cycle advocacy  is in Ireland, the challenges faced in Romania appear to trump ours – but we wish our colleagues in Romania the very best with their work. 2 – Increasing Diversity at the Helm of Advocacy Organisations
One of the best plenary sessions at Velo-city was on the topic of “Citizens, Stakeholders and Community” and the CEOs of some of the largest advocacy organisations in the world shared their views on the topic. The session was moderated by Saskia Kluit, former Director of the Fietsersbond / Dutch Cyclists’ Union and current Member of the Senate of The Netherlands.

Ann-Kathrin Schneider is the new CEO of the ADFC (the German National Cycling Advocacy Association) which has 215,000 members, and she herself has recently moved into the sustainable transport advocacy space having come from the climate movement. She had traveled directly to Ljubliana from the 30,000 strong cycle protest in Berlin which was calling for more space on Berlin’s roads for people on bikes. She stressed the need for there to be greater collaboration between climate and sustainable transport campaigners.

Sarah Mitchell is the new CEO of Cycling UK, which itself has 70,000 members from England, Wales, Scotland and Northern Ireland. Sarah has recently led the move for Cycling UK to rejoin the European Cyclists’ Federation. She is putting a special effort into helping to diversify the membership of Cycling UK, and is seeking to resist the attempts of the UK media organisations to drag the cycling advocates into the culture wars and the false dichotomy between “cyclists” and “drivers”.

Jill Warren, CEO of the European Cyclists’ Federation, recounted the story of the global campaign led by ECF that included an open letter to governments at COP26 signed by 350 organisations worldwide, and that helped achieve a last-minute recognition of active travel in the official declaration published at COP26 Transport Day in November 2021. Clearly, at both EU and national levels, there is a need in the policy debates about decarbonising transport to continue to shift the emphasis from only thinking about e-cars, to broader considerations of how much we travel and by what means.

Jenn Dice, CEO of People for Bikes in the US, spoke of the need to build coalitions in their advocacy work, and to lead with the argument of ‘developing mobility choices’ rather than ‘providing for cyclists’. This was a message echoed by Ana Carboni, CEO, Union of Cyclists of Brazil which was founded around 15 years ago.

3 – Let’s Talk About Funding
One of the essential demands of cycling campaigners over the years has been for adequate funding for cycling interventions, and I spoke about Cyclist.ie’s successful advocacy work in this domain. This work embraced research to interrogate how transport capital funding was being spent over several years, drafting pre-budget submissions, organising protests and putting the funding demand to the fore ahead of General Election 2020. My full presentation can be read here.

The advice from Dan Kollár from Cyklokoalícia in Slovakia, in his own presentation in the same session (abstract here), was that cycling advocates need to focus on seeking to reach higher modal share of cycling – and reducing the mode share of driving – by having the right selection criteria set for infrastructure projects. This point was endorsed by other attendees who stressed the need for municipalities to have coherent plans ready while also securing significant funds for cycling.

4 – Keeping the Planet’s Health to the Fore
With all the talk of continually expanding the production of new bikes and e-bikes, it was refreshing to hear the grassroots perspectives of Priscillia Petitjean (pictured below) from Les Ateliers des l’Audace in France. She stressed the need for us to take a close look at the resources involved in bike construction and disposal, to promote the refurbishment of second-hand bicycles and to increase access to bikes.

Issues around the affordability of bikes were also raised by Angela Van der Kloof who pointed to research showing that 10% of households in Amsterdam in The Netherlands – one of the richest countries in the world – cannot afford bikes for their children. Meanwhile Oscar Funk from the City of Copenhagen (pictured below) focused on the transport poverty arguments and the need for more inclusive policies to support a wider take-up of cycling.

5 – “The future is already here – it’s just not very evenly distributed”
The plenary session on Urban Mobility Innovation was particularly stimulating – with the quote of William Gibson on the future (above) referenced early on. Phillipe Crist (from the OECD) reminded us that 2050 is to today as 1994 is to 2022, so the landmark year of 2050 – in terms of the need to have fully net decarbonised systems – is really not that far away (just 28 years). Karen Vankluysen, Secretary General of Polis (the network of European cities and regions working together to develop innovative technologies and policies for local transport), spoke of the future of mobility needing to be “people-powered”, involve “peak seamlessness and intermodality” and of autonomous cars “only being used for very specific contexts”. Meanwhile Mette Granbergy from Helsinki Region Transport spoke of the need for “transport emissions to be sorted” and for infrastructure not just to be enabling of cycling, but to be properly inviting.

With the global population expected to be around 10 billion people by 2050 and with 70% living in the urban environment, it really is essential that our systems of mobility are zero carbon, equitable and without the mass of casualties that is currently an inherent part of our transport systems.

In Conclusion
It was informative and fun to be back at Velo-city, and encouraging to see the strong participation of Irish delegates. The informal conversations over lunch, between formal sessions and on the cycles are as important as the pure content of the sessions. Do take a look at the short video produced by ECF to get a better flavour of the event.

However, the representation from Irish officialdom was not evenly distributed countrywide, so I really think it’s essential that Councillors, Directors of Services and senior officials from local authorities not represented in Ljbubliana or at recent Velo-city conferences seek to attend and present at Velo-city 2023 in Leipzig and Velo-city 2024 in Ghent. The call for abstracts for Leipzig will happen (most likely) in September 2022.

Ireland has shown it can take the lead on “building ambitious and innovative cycling infrastructure” with Dun Laoghaire-Rathdown County Council winning the ECF’s Cycling Infrastructure Award at Velo-City 2022. We need to see a lot more of that as the pressure is on both at home and abroad to decarbonise our transport systems very quickly.

For further accounts of the conference, see the ECF’s Daily Reports: