Cyclist.ie made the submission below to the National Transport Authority (NTA) on Friday 18 November 2022 in respect to the public consultation on “CycleConnects”. This was all about the proposed cycle networks in both rural and urban areas lying outside of the Greater Dublin Area (as shown in the light green shaded counties of the map below).

Cyclist.ie wishes to thank its many volunteers who chipped in with their local knowledge and informed reflections as the submission was being drafted – terrific team work all round. We also note the many more detailed submissions made by our local member groups in regard to county-specific proposals (which you can read here amongst all the submissions published by the NTA).

We will be following this process closely as it moves to the next stages of development. Watch this space. 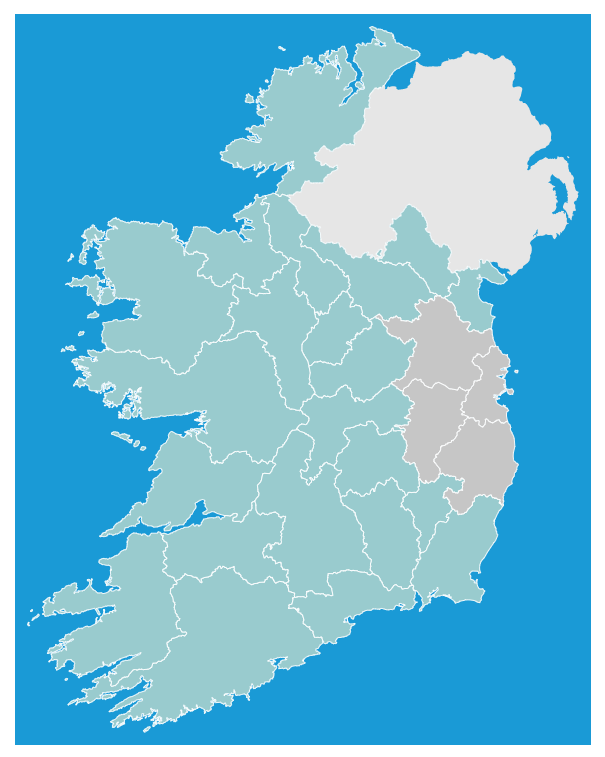 1 – Introduction
Cyclist.ie, the Irish Cycling Advocacy Network (ICAN), is the federation of cycling advocacy groups, greenway groups and bike festivals on the island of Ireland. We are the member for Ireland of the European Cyclists’ Federation.  Our vision is for an Ireland with a cycle friendly culture, where everyone has a real choice to cycle and is encouraged to experience the joy, convenience, health and environmental benefits of cycling.

Cyclist.ie welcomes the publication of the draft Cycle Connects proposals available at https://consult.nationaltransport.ie/en/consultation/cycleconnects and we are happy to provide feedback at this stage. We note and welcome the extended deadline of 18 November (moved from 11 Nov last week).

Our submission here concentrates on providing feedback on the principles and standards underpinning the development of the cycle network and, crucially, interrogating the meaning of what is proposed as a cycle network, rather than location specific feedback. We also comment on the ongoing planning of the National Cycle Network (NCN), and the relationship between both projects.  Additionally, many of our member groups are making their own separate submissions in regard to the proposals and these will provide more location specific feedback.

2 – General Comments
We welcome the commitment in the CycleConnects document ‘to enable and promote higher levels of sustainable transport and are therefore tasked with increasing active travel mode shares – supporting new cyclists, those transitioning from other non-sustainable modes and improving conditions for existing cyclists’.  It is an important and welcome restatement of government policy in this area.

2.1 Cycle Connects and the National Cycle Network (NCN)
We note the reference in the CycleConnects report to the regular collaboration with the TII team working on the NCN.  This is good to hear, although we are disappointed that the publication of the NCN final report has been delayed beyond its original date, and thus makes comparison for us, as advocates, more difficult.  Much of our (Cyclist.ie’s) comments in our detailed  submission on the NCN, delivered earlier this year, can be applied to the development of CycleConnects. Of necessity there is some repetition. In essence all of the points raised in Section 2 of our NCN submission are also germane to the development of CycleConnects and we ask the CycleConnects team to examine that submission and to consider its recommendations.

2.2 Who are the target users for each route type?
We would like to see an explicit statement in all of the documentation (both the overarching and the county level documentation) indicating who the target users of the routes will be – ie. for:
– urban primary routes
– urban secondary routes
– greenways
– inter-urban routes
This appears to be missing in the documentation. Without having a clear sense of who exactly the routes are being/will be designed for, the concepts remain too vague, and the meanings of the lines on the map remain too nebulous. This makes the consultation more difficult to respond to.

Without the above being thought through, we would be concerned that future decisions about route alignments and infrastructure types and standards end up being made with ambiguous and perhaps conflicting senses of who the target users will be – and this could lead to routes of sub-optimal quality being advanced.

2.3 Urban Cycle Networks
It is critical that any proposed urban cycle networks are given protection in local development plans into the future, to preserve potential alignments.  Ideally the core networks need to ensure that there are permeability links into and from them to ensure maximal usage of the network, by surrounding populations.

In the ‘Route Development Methodology’ section of the main report , while ‘services’ are generally referenced in ‘Link Selection’ there is no explicit designation for bus or train stations, which will be a critical part of any developed network, as transport hubs . We want to see these destinations identified clearly on the Cycle Connects maps because inter-modal trips involving bikes and trains/buses will be critical as we seek to reduce the number of car journeys.

While we note the point stated in the FAQ doc that “no  cycle  infrastructure  has  been  considered  as  part  of  the  development  of  these  routes”, we would like to stress at this point the need for 30km/h to be considered as the default urban speed limit in each of the urban areas intersected by the network.  There is a need to make towns and cities cycle friendly for all ages and abilities. The default 30km/h speed limit is widely recognised as the far safer vehicle speed limit to achieve that target (see https://www.love30.ie/ and other sources).

Drawing on some of the analysis conducted as part of the (2007) Strategy for the Development of Irish Cycle Tourism, what often happens with Irish towns is that there is ribbon development extending out from the villages and towns in all directions – not just one direction, linking to other villages (which might be a good distance away) – which means that interventions to improve the quality of provision for cyclists needs to be concentrated on all roads extending from these villages.  Therefore, one might end up with slightly wider local networks (extending into rural areas), which themselves are linked to the county cycle networks.

2.5 County Cycle Networks
We commend the detailed exploration of initial potential cycle networks, and the opportunity to comment on them.  In the FAQ document, under the section called “How have the rural routes been selected”, the following text is provided:
‘It has generally been found that rural regional roads tend to connect more smaller towns and villages than National 100kph roads which will miss many of these towns. The exception to this is when a 100kph National Road is present with a wide hard shoulder and thus the potential for cyclist infrastructure, and potentially is located along the TII National Cycle Network’.

However, we introduce a cautionary note on the above statement as follows:

(i) Many rural regional roads carry far higher traffic volumes than the local roads, and often at much higher speeds. They are also not particularly pleasant places to cycle on, and are not suitable for less experienced and/or younger cyclists.

(ii) While some N roads do indeed have wide hard shoulders on them, it does not follow that they may be suitable as designated safe cycling routes. The experience of cycling directly alongside motor vehicles (including HGVs etc) travelling at or close to 100km/h is frightening, and generally to be avoided.  Additionally, Cyclist.ie wishes to emphasise that the so-called ‘greyway’ solution is certainly not a fit answer to this issue – See our website piece.  The consultants and future designers need to be especially aware of the limitations of providing formal cycle routes on N-roads, as well as recognising the (apparent) positives.

(iii) Cyclist.ie would ideally like to see a much greater use of the local road network (i.e. non- R or N roads) in the development of the county cycle networks – but these roads need to be re-examined so that “cyclists are expected and respected” as set out in our Rural Cycling Vision.  And as these local roads move closer to towns and villages (and hence have higher traffic volumes), then special attention needs to be given to intervening more radically in terms of reallocating space for people on bikes and bringing speeds right down.  Some design issues for these roads are dealt with in the latest update of the TII Rural Cycleway Design, Section 3.4.

Cyclist.ie would like to see the locations of all schools shown on the county level maps, not just on the urban maps.

2.6 Standards
While not specifically referred to in the main CycleConnects Summary report, we note the reference to the National Cycle Manual under the ‘segregation’ FAQ.  It states that the ‘National Cycle Manual and other cycle design guidance’ will be utilised to ‘inform infrastructure upgrades’.  We would like to see all reference documents utilised for cycle design purposes clearly identified as part of this project, for the guidance of designers in the development of these networks.

3 – Conclusion / Summary
Cyclist.ie warmly welcomes this first phase of the initiative on the development of local cycle networks across the country, which we fully support, and we look forward to feeding into the actual development of the proposed routes.  We want to see these routes developing quickly and being used by local communities.  Our local member groups are submitting detailed comments on specific local county networks.

As outlined above, and in our previous submission on the National Cycle Network, we want to see:
– Prioritisation of route development to ensure highest potential usage by the local populations
– Inclusion of bus and train stations (and Transport Hubs) and Schools/Colleges on all network maps, both urban and rural
– Clear linkage with final NCN alignments
– Clarity on target group users for the networks
– Greater consideration of L road usage as part of the networks (along with a re-examination of speed limits on those roads)
– An abandonment of the original concept for ‘Greyways’ on National or Regional Roads.
– Listing and Application of the Design Standards to be applied

Cyclist.ie is happy at any stage to engage directly with the NTA in the furtherance of this important project, as part of sustainable transport in Ireland.