On Tuesday 1st March 2022, Cyclist.ie’s Love 30 group, which campaigns for 30kph speed limits in urban areas and safer speed limits generally, presented to the Oireachtas Committee on Transport and Communications.

This was an important step in the process of reducing urban speed limits to a safer level for all vulnerable road users, and making our cities and towns safer. A full preparatory statement was outlined and presented, and can be viewed as an attachment on the Love30 website here.

Love 30 was represented by Muireann O’Dea and Joan Swift (pictured above), while Dr. Lorraine D’Arcy from TU Dublin also presented – in addition to the representatives from the Road Safety Authority (RSA) – as can be seen in the recording of the session.

The RSA CEO Sam Waide (pictured below) urged the introduction of default 30kph urban speed limits both to increase safety, but also to bring us in line with other European countries. He emphasised that Ireland is lagging behind, and as a result deaths and serious injuries continue. The international evidence clearly supports the introduction of the lower speed limits. 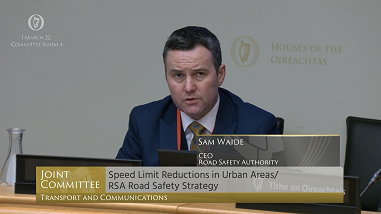 Dr. Lorraine D’Arcy (pictured below) emphasised the loss of human interaction in our urban roads and streets due to the preponderance of the private car, and also the need for a cross-sectoral multi-stakeholder approach to the assessment of the benefits of reduced speeds and reduced vehicle use. 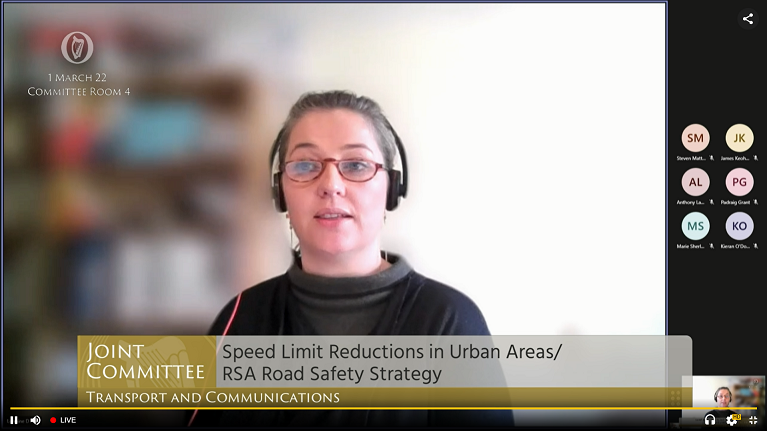 Love 30 formally presented their statement, and overall the Committee accepted the rationale and evidence behind the call.  Love 30 issued a Press Release beforehand, which prompted some media coverage of the issue – including the Irish Times’ piece Streets devoid of human interactions due to dominance of vehicles committee told on 2nd March.

There was strong support from Committee members for a default 30 km/h speed limit in built-up areas, with exceptions for some roads where justified with evidence, and they would like to see it implemented as quickly as possible.

This has been a very positive result from this presentation, and underpins the great work that Love 30 have been doing over the past years.

If you want to get involved in this vital area of road safety and improvement in our cities you can contact Love30 at [email protected] or check out the website at https://www.love30.ie/.